Should I get a typhoid vaccine? 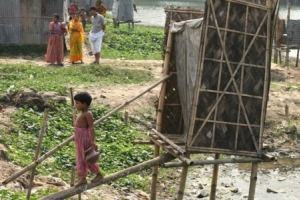 This alarming headline appeared in my inbox the other day, prompting a reminder of the importance of monitoring and vaccinating against this potentially dangerous disease.

Typhoid is a life-threatening illness caused by eating food or drinking water contaminated with the bacterium, Salmonella Typhi.

Typhoid is relatively rare in developed countries like the US but still common in developing countries with poor hygiene and sanitation. According to the CDC, of the approximately 5,700 cases that occur each year in the US, up to 75% are acquired while traveling internationally.

In recent years, a new strain of typhoid bacteria, labeled H58, is taking hold around the world. The new “superbug” has changed its DNA to become highly resistant to most antibiotics that can usually treat typhoid disease; another product of our global overuse of antibiotics. Research scientists are calling this developing epidemic an "ever-increasing public health threat".

Where in the world am I at risk of acquiring typhoid?

Travelers to Asia, Africa and Latin America are especially at risk. The risk of typhoid among US travelers to the Indian subcontinent is 18 times greater than that to other regions of the world; for foreign-born US citizens the risk is increased by a further 25%.

Getting a typhoid vaccine markedly reduces your chance of getting sick from the disease. Two vaccines are available in the US to prevent typhoid; one is an injection, the other an oral live vaccine.  Either one of these should be completed at least 2 weeks prior to departure. The typhoid vaccine is usually available only in travel health clinics; not in your family doctor’s office.

Of course, prevention is the key. Don’t get sick in the first place. Food and water precautions will also help to prevent other gastrointestinal diseases such as cholera, Hepatitis A and dysentery.  As we say in travel medicine: “Boil it, cook it, peel it, or forget it.”

And, remember that any illness with a fever after returning from overseas travel should be considered serious and evaluated immediately by a medical professional.