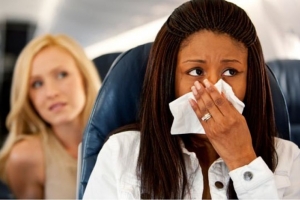 Get a flu shot before you travel.

Fever, chills, and muscle aches, oh my! If you’re experiencing these symptoms, as well as a headache or a nonproductive cough, the flu bug may have bitten you! Continue reading for ways to avoid the flu while traveling this year.

First, it’s important to note that while you may feel sick and call what you have “the flu,” true influenza is caused by an infection of the upper respiratory tract. The terms influenza A or B, Bird Flu, Swine Flu, and H1N1, may sound like complex ailments, but most of them are relatively common and highly treatable. Still, I will likely write another blog just to sort these diseases out. Stay tuned for that piece!

A common cold is one thing, but don’t be fooled by influenza and its symptoms. According to the CDC, data from 1976 to 2006 found the annual deaths of influenza ranged from about 3,000 to 49,000 people in the United States.

Unfortunately, influenza has successfully affected and infected humanity for a long time. In 1918, nearly half of the world’s population was diagnosed with the flu, and tragically, influenza killed more people in a matter of weeks than those who perished during the First World War. This event became the first recorded pandemic in our nation’s history. Needless to say, influenza can be a very serious heath concern.

Influenza patterns and strains vary throughout the world. The avian influenza type H5N1, also known as bird flu, is prevalent throughout Asia and can result in deadly outbreaks. A deadly swine flu outbreak killed more than 2,500 people across India this year as well. Therefore, it’s imperative you schedule an appointment at TravelBug Health if your itinerary includes regions of increased risk.

Ironically, influenza may be the globe’s busiest frequent flyer! Flu season in the Northern Hemisphere runs from October to March, and from April to September in the Southern Hemisphere. Because seasons near the equator don’t change, the flu season can last throughout the year in tropical locations. Fortunately, the flu vaccine used in the United States usually protects against major viruses found in other parts of the world1.

Speaking of flu vaccines, while there is no treatment that is capable of killing the virus completely, there are medications available that can lessen the course of the disease. Once again, prevention is your best bet! In the U.S., the Advisory Committee on Immunization Practices recommends an annual influenza vaccination (also known as a “flu shot”) to decrease your likelihood of developing the disease.

Flu shots are currently the most effective treatment options for preventing influenza and its complications. There are a number of flu vaccines available on the market today, so it’s important to talk to your travel health specialist or primary care physician about which one(s) may be right for you.

Unfortunately, I’ve had patients needlessly die from complications of the flu, all for the sake of not getting a simple shot. When more people in the community get vaccinated, it lessens the risk of infection for everyone, something epidemiologists call “herd immunity.”

So, you may be asking yourself what the flu has to do with travel. Influenza viruses spread from person-to-person contact. When people travel in confined spaces like planes, trains, buses, or crowded tourist destinations, they’re at risk of developing the flu. It’s that simple.

Additionally, when you travel across time zones or on a tight business itinerary, you’re disrupting your body’s regular routine, which weakens your immune system. All of these situations can make you more susceptible to getting sick.

If you’re traveling to a country affected by a flu outbreak, make sure you come into TravelBug Health at least two weeks before your trip to receive a vaccine. This will help you develop immunity to the flu. Signs and symptoms of influenza are often difficult to distinguish from other respiratory infections. Therefore, if you’re suffering from flu-like symptoms, see a doctor right away.

Up Next: Influenza: Fact, Fiction, and FAQs