What is the risk of catching Ebola? 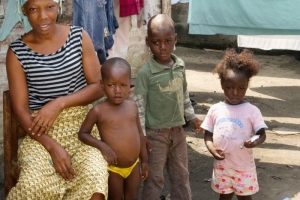 local family in Monrovia, Liberia under observation by the CDC

World health experts are dealing with an international health emergency as the death toll increases in the recent Ebola Virus (EBV) outbreak in West Africa. The Centers for Disease Control and Prevention (CDC) is reporting that 2240 people have been infected and 1229 have died as of Tuesday, August 19 in the largest outbreak of EBV in history.

What does this mean for international travelers? Can someone catch the virus from an infected person on a plane? Are we at risk here in the United States?

According to the CDC and Medecins Sans Frontieres, Ebola Virus disease (also known as Ebola hemorrhagic fever) is a rare and deadly disease that can kill up to 90% of the people who catch it. Currently there is no vaccine or effective medication widely available to treat it.

The ease of international travel means that infected persons could board a plane and end up in another country; as evidenced by four deaths from EBV in nearby Nigeria. However, “unlike infections such as influenza or tuberculosis, Ebola is not airborne,” says Dr. Isabelle Nuttall of the World Health Organization (WHO). “It can only be transmitted by direct contact with the body fluids of a person who is sick with the disease.” The risk of Ebola transmission on airplanes is so low that it is extremely unlikely that one could catch the disease from a fellow passenger or during routine travel.

What precautions should international travelers take? The CDC and the U.S. State Department have issued their highest level travel alerts and are warning against non-essential travel to Liberia, Sierra Leone and Guinea, the three countries most affected. Fortunately, the likelihood of an outbreak here in the United States is remote, because of better public health preparedness and procedures.

International travelers should always ensure that their routine vaccinations are up to date to protect themselves from diseases like measles and influenza that are more common and far more contagious. The preliminary symptoms of these illnesses or other common tropical diseases are virtually indistinguishable from those of Ebola infection.

Check with your travel medicine specialist to make sure that your health is protected for the region that you intend to visit.