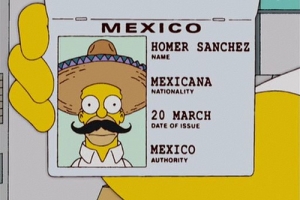 Don't be a D'oh. Keep your passport up to date.

Recently, I found myself in one of those awkward travel predicaments.  My three children had to travel to Canada on short notice for a funeral and I discovered with a panic that their passports had expired two weeks prior.  D’oh!

Not only did I not have the usual several weeks it takes to get a passport renewed, but new laws require that all minors have to apply in person at a passport agency office, even for a renewal.

With only a few days before traveling, I considered using a private passport expediting service, but even they couldn’t pull it off, regardless of how much I was willing to pay.  Nowhere on the http:/travel.state.gov  website could I find an escape clause and realized I had no choice but to cross over to the dark side and entrust my fate to the federal government bureaucracy.

I called the 1-800 number as directed and was surprised to actually get an appointment at the closest Western Passport Office in Tucson, Arizona, - a four hour round trip, even at generous highway speeds. My appointment was the last one of the day, on the Friday before the Memorial Day weekend and we had already bought tickets to fly out on the holiday Monday.  My prospects for success were looking grim.

I snatched my kids off the curb as the last bell of the school year rang and with cautious haste, made it to the Tucson passport office a half hour early for our appointment.

I was already preparing my travel nightmare story to tell for years to come.  As an immigrant to this great country, I am all too familiar with waiting all day at the office of what was then the Immigration and Naturalization Service.

But wait… could it be… did I step into an alternate universe and discover a friendly and efficient government agency office?

We were welcomed by smiling security guards and were waited on immediately. I had all my documents in perfect order and the intake paperwork was processed in less than 30 minutes. We didn't even have time to sit down before being called to the next window. Two hours after walking in the front door, we were returning home with three expedited passports in hand. I wouldn’t have believed if it didn’t happen to me.  A special shout out to Macrina and Deanna for helping to make a great customer service experience.

Since the Western Hemisphere Travel Initiative took effect in 2009, all travelers are required to have a valid passport (or NEXUS card) to leave or enter the United States, even to Canada or Mexico.  Make sure your passport is always current with an expiry date at least 6 months beyond your date of departure.

Sometimes we mess up and forget, but in Arizona anyway, at least there is a backup plan available.