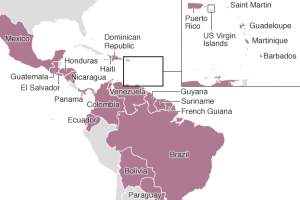 Zika virus is rapidly spreading throughout the Americas, and yesterday the World Health Organization (WHO) declared a Public Health Emergency of International Concern. The WHO alert places Zika in the same category of concern as Ebola.  Margaret Chan, the Director General of the WHO, addressed an emergency committee and described the epidemic as “spreading explosively”.

The CDC has responded to the growing public health threat by adding an additional four countries to its travel advisory; American Samoa, Costa Rica, Curacao, and Nicaragua. Click here to see previous alerts and countries involved.

Zika virus infection is spread by the Aedes aegypti mosquito which is found in most tropical countries. The infection usually causes only minor flu-like symptoms and not everyone with the virus gets sick. The danger is to woman who are pregnant or plan to become pregnant, since infection with the virus is believed to be linked to microcephaly, a potentially serious birth defect. Researchers are also investigating a possible link between Zika virus and Guillain-Barré Syndrome, a neurological condition.

According to Dr. Anne Schuchat of the CDC, the Zika virus causes temporary rather than lasting infection, and in most cases, the virus passes quickly through the bloodstream in about a week. This means that Zika virus infection is not believed to be a risk for a woman becoming pregnant after the infection has cleared.

So far, the disease has only been transmitted through mosquito bites and not by person to person contact, such as in the recent Ebola outbreak. As one health official put it, anyone traveling to regions with Zika virus should take “scrupulous” insect bite avoidance measures. There is not currently any medication or vaccine available to prevent or treat Zika virus infection.

Public Health agencies including the CDC and WHO, are quickly responding to the growing health crisis that many experts believe has an “explosive pandemic potential”.

TravelBug will keep you updated as events unfold.